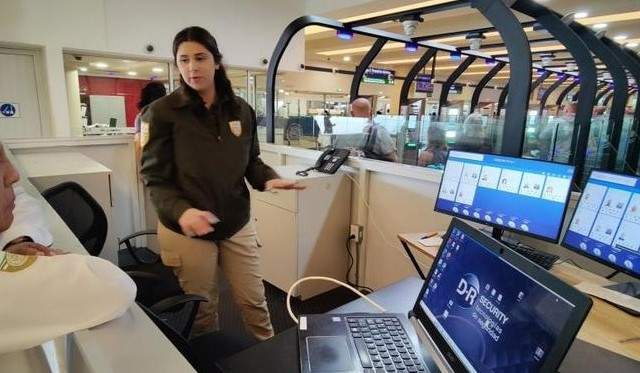 More than 56,000 Americans have passed through new ePassport gates at Cancun International

Cancun, Q.R. — The Commissioner of the National Institute of Migration (INM), Francisco Garduño Yáñez, verified the operation of the 18 ePassport gates installed at the Cancun International Airport.

In a statement, he reported that since they were installed during the last days of December, more than 70,000 travelers have used the automated gates to enter the country at the Cancun airport.

On Thursday, Garduño Yáñez toured terminals III and IV where he confirmed the operation of the new Autonomous Migration Filters (FMA), which he said, are a safe and efficient international connectivity in tourism and business matters.

He reported that since their installation in Cancun, 70,010 have used the Filtros Migratorios Autónomos (FMA) between the two international terminals. Of the Cancun users, 56,779 are from the United States, 6,045 from Canada and 7,186 have been Mexican nationals.

Garduño Yáñez said that the system will be installed inside the international airports of Los Cabos, in Baja California Sur and in both the Guadalajara and Puerto Vallarta airports in the state of Jalisco.

More from Travel NewsMore posts in Travel News »
This site uses cookies to personalize content, adverts and analyze traffic as well as to remember your preferences and repeat visits. By clicking “Accept”, you consent to the use of all cookies. Learn more about cookies and how you can change your settings. I accept cookiesI refuse cookiesLearn More